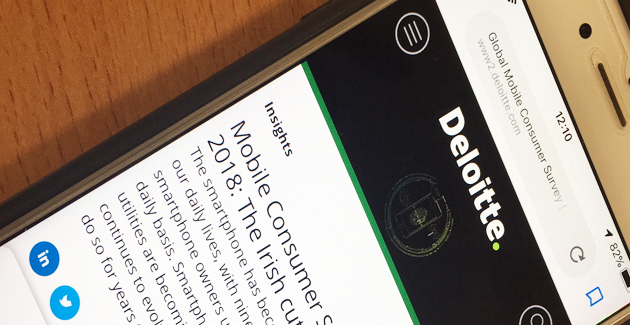 The smartphone has become intertwined into our daily lives, with ninety eight percent of smartphone owners using their devices on a daily basis. Smartphone capabilities and utilities are becoming ever greater and usage continues to evolve, and should continue to do so for years to come.

The Deloitte Mobile Consumer Survey: The Irish Cut explores some of the key themes that this year’s Mobile Consumer survey has revealed, how they are disrupting the mobile landscape today and likely to impact it in the next five years.

The Irish cut is part of Deloitte’s Mobile Consumer Survey, a multi-country study of mobile phone users around the world. The 2018 study comprises 54,150 respondents across 35 countries and six continents, with our sample for Ireland covering over 1,000 respondents aged 18-75.

Send Thousands of Messages –
Createtext offers you complete flexibility. You can send bulk messages from your computer or from your mobile phone – whatever suits you best, wherever you are.

Send Messages Online or from your Phone
Once you’ve set up your contact groups, you can choose the group you want to send your message to and decide whether you need to receive replies. Then simply type your message and either choose to send it now or schedule it for sending later.

X
We use cookies to ensure that we give you the best experience on our website. If you continue to use this site we will assume that you are happy with it.OkRead more